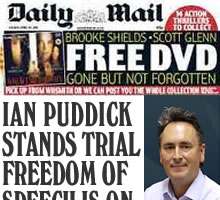 Ian Puddick’s campaign to highlight the Abuse of Power used against him by City of London Counter Terrorism and Major Crimes Directorate initiated by private security Kroll is finally being published in the mainstream media.

Now the Daily Mail has picked up on the story and published this in their newspaper. Sussex Police confirmed in writing this is ‘a CIVIL MATTER’ they refuse to get involved.

Ian is appalled at the abuse he received by City of London Detectives whilst in custody, the amount of tax payers money estimated by one official at over