Kroll Uses Untraceable Mobile Phones – They Say So In An Email!

Kroll Uses Untraceable Mobile Phones – They Say So In An Email! 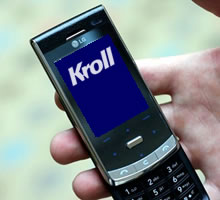 Did you know that in the UK there is a commercial organisation that seems to be allowed to flout the law by using untraceable mobiles phones.

Its a well known fact that criminal gangs and drug dealing cartels all use untraceable phones and its our understanding that its illegal in this country!

Yet staggeringly Kroll the City Security firm headed up by Benedict Hamilton seem to be allowed to carry on with this nefarious practice unchecked – this is worse than the News Of The World Hacking Scandal!

Take a look at the email PDF (Link Below) go to Page 2, paragraph 2 where you will see Benedict Hamilton confirms that they use mobile phones which cannot be traced nor linked back to Kroll.